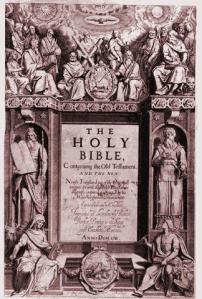 Isaiah
There goes another one.

Thesssalllon…
…We’ll come back to that one.

Judges
The panel on Prophet Idol.

Passover
What the judges did to bad acts on Prophet Idol.

Abraham
Father of Jews, Christians, and Muslims. He got about a bit.

Letters
The Bible has a lot of these.

Numbers
A lot of these too.

Verses
And a lot of these. No chorus, though.

Ruth
Is stranger than fiction.

Song of Solomon
“Got up in the morning, slaving for breakfast…”

Psalms
The sensitive bit of your hsands.

Thesallonn…
…No, still not sure how to spell it.

Acts of the Apostles
Once Jesus had gone, the disciples had to come up with a new show. Thomas opened with his demonstration of doubting, Luke did a bit of walking on the water, and Peter, Paul, and Mary finished off with their Palestinian chart-toppers.

Samson and Delilah
Another double act. Popularised the catchphrase: “Keep your hair on!”

Jehoshaphat
Had a jumping act.

Magi
Despotic leader who oppressed the Jews by killing the firstborn of union officials, taxing milk and honey, and selling off the camel trains.

Daniel
Travelling tonight on a plane. Probably the flight from Egypt.

Pilate
Man in the cockpit for the flight from Egypt.

Jude
Took the Song of Solomon and made it better.

Hosea
Another sneeze. Bless them.

Hebrew
What goes in the wine cask.

Dead Sea Scrolls
Painful condition contracted by too much swimming in the Dead Sea. Explains Jesus’s preference for walking on the water.

Qumran
The lord is my shepherd. This is one of the commands to his sheepdog.

If you're reading on a tablet or small screen, click on the three lines above for the full guide

Not FOR beginners, but BY beginners…

“Most beginner’s guides are for beginners. This is different. It’s BY beginners…”

New entries to the right   ➙